SPAM is not new,it’s been around for years.  I think my mom used to try and serve it for dinner.  I’m not sure if anyone really knows what it is.  And the mystery builds as you open the can an see the gelatinous substance on the top of the meat compressed loaf of something.  But in all fairness, if it was the only thing to eat and I was hungry…maybe I would eat it… but only if fried to a crisp! 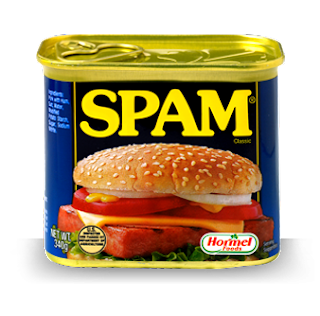 Thirty three years later was found the humor of SPAM as Monty Python Flying Circus so eloquently shared with us back in the day of satirical comedy and to my recollection they did so without so much as hint of filthy language…unless I just didn’t hear it beneath their British accents.

They made SPAM famous!  I wonder if the stock went up after this aired back on December 15, 1970.

And then there is electronic SPAM and we all know what that is.
In fact we’ve been dealing this pain in the rear since 1978!
Did you know that?
That is when the very first SPAM email was transmitted.  In fact the whole back story about electronic SPAM is extremely interesting.  You can, if you want, read all about it here.
Even before email SPAM we had to endure another form of SPAM 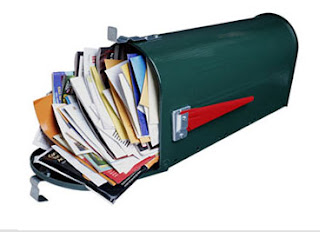 and we still do…it’s called junk mail
same as SPAM but it takes up more room in the real trash can and our landfills.  But oh wouldn’t it be nice to be able to push a button and our junk mail disappears?  DELETE!!!!
I read all about the history of SPAM and as interesting as it was, it still doesn’t validate the arrogance of the act of SPAMMING.
It is irritating to deal with day in and day out, it’s intrusive and it’s just plain bad manners. In all of the history I thought that I would discover that SPAM was an acronym and I wanted to know what words it represented.  But that wasn’t the case.  So I made up my own versions.
Self Promoting Advertising Mail
Shameless Plug About Me
My whole reason for writing this post was to vent my irritation of another type of SPAM.   Now that many people have the hang of social networking, blogging and selling products and services online, many people think it’s okay to take advantage of another persons hard work and place their SPAM on someone’s fanpage, in the blog comments or by swiping email addresses from friends and family.
That is not nice and in my book it’s just bad business. It makes you look foolish and lazy.
If you think that sounds really harsh then maybe this has not happened to you. But let me tell you, it is irritating that others don’t know the rules, proper etiquette or simple common sense.
Now that allow you to add the @ sign before a person’s fanpage name I have witnessed several blatant SPAM posts.
Promoting yourself is not bad, it’s how you do it.  There is a right way and a wrong way.
Example:
Right way to promote about another fanpage or blog…
on your fanpage or profile page status you would write “Great blog post at http://xxxxxxx.com @rustiqueart
When you do it this way you are promoting that other persons work to all of your fans and because you used the @ sign before their name it will post to their wall also, thus promoting you to their fans.
Wrong way to promote about another fanpage or blog…
you go to that another persons fanpage and post on their wall about your blog, giveaway or products
or you post on your wall about your agenda and then add another persons @fanpage name.  Doing that will post to the other persons wall which does nothing for them, only you.  That is kind of like stealing someones hard work. I’ve seen this done on fanpages with a lot of fans or “likes” as they would prefer us to say.
So to recap…it’s okay to promote you as long as you are promoting the other person page that you are posting about.  But the safest thing to do is just simply ask first.  Many times fanpage owners will not allow links to be posted by others, they set their settings so the outside link posts are put on the “just friends” page.  Others don’t mind the banter back and forth between their fans so they leave that option open.  This is great for building more fans and building a great business following.  But realize that all of their fans aren’t there to see someone else promote themselves.  And futhermore that person with the huge following worked their butt off to get there, by creating a reputation as a blog writer or a business owner.
Think of it this way…you spend thousands of dollars for a huge billboard advertisement and someone climbs up and write their name and products over yours. Not nice!
Another form of SPAM is in blog commenting.  This is done usually by just blatantly leaving your URL or link as the comment and that’s it.  Or you will see someone write something totally off the subject of the blog post and then leave hundreds of links.  Ugh…hello!
Do they really think that their comments will get approved and their links will show up as backlinks.
You want to promote your blog or site?  It’s okay to do that but at least pick a blog that has something in common with what you do or like and really read the blog and then leave a comment that is relevant to the post, better yet leave helpful suggestions.  You will be allowed to leave your URL and you will build a following with the blogger and their followers.  You might even make some new friends! 🙂  OH…and if you really love that blog, don’t forget to promote it on your fanpage or tweet about it.
Is there SPAM on Twitter?  You betcha…but I think I’ve made my point and I am ready to step down off of my soap SPAM box tonight!
How many times did I type the word SPAM?
(No cans of SPAM were injured or abused while writing this post!)
Was this post helpful for you? or was it just a waste of time?
This post was not aimed at any one person and was not meant to offend 🙂
Peace