Today is my Daddy’s birthday.
He would be 70 years old today.
That means these wonderful little cowboys boots are probably about 67 years old, as these were his when he was probably a toddler. I would imagine he might have been three when he wore them, judging from the size.
A few years ago my grandmother past these two pair of boots down to me. I cherish them not only because they were my dad’s but because they are something I can continue to hand down to my children.
The photograph behind the boots is a picture of my dad on a pony when he was about 4 or 5 I would guess. No actual date is on the photo, but if I’m correct that would be about 1945. Wow! wasn’t he a cutie. I can only speculate the story behind this photograph. It’s obvious my dad enjoyed being dressed like a cowboy. I remember he had told me that when he was little he would rush home from school to listen to Howdy Doody on the radio.
The second pair of boots where probably the ones he had on in the picture.
Imagine that. 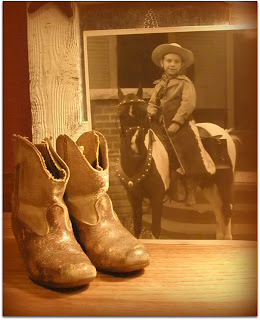 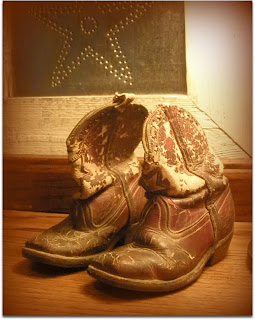 This picture is one of my favorites of my dad when he was small. I can imagine he was a sweet little guy, full of energy when just a dash or ornery.
Looking at this picture, I can see that my boys and grandsons share some of the same features. 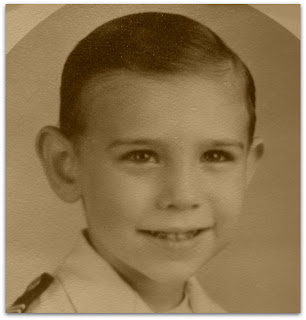 This next photo is my dad in high school, maybe about 18 years old. He was dating my mom at this time. The dog in the photo was my mom’s dog, his name was Butch and the story is that one day the was a scratching noise at the front door. Someone in the family opened the door and this dog ran between the legs of the person opening the door and took them for a ride. He had a home after that. I remember Butch, he was around when I was a little girl. In this picture I really begin to see how much my boys look like their grandpa Ed.

My mom and dad married in 1959, he went into the Army for a short while, then became a dad to me! Ten years later my sister Heather was born. That same year my daddy’s younger brother, Ronny was drowned. My first experience with death. It was so hard, I thought Ronny hung the moon. It was even harder watching my dad mourn the loss of his little brother. My parents divorce came in the late 70’s. By that time I was on my own, a child bride at 16 and time seem to fade after that. But dad and I made many memories, ones that I will cherish forever. 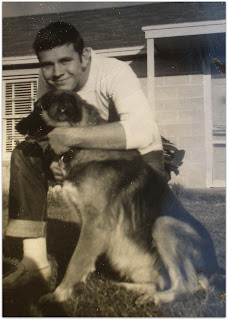 This last photo was a few years before he was fatally injured in a work accident.
I know that I am partial, but I always thought my daddy was the most handsome man in the whole world.
I’m pretty sure he was a hunk, because most of my friends said he was good looking. But with those looks came a wonderful personality. He was sensitive and could become emotional, but he had a temper. I know because I was sometimes the cause of his temper. He was moody too and would brood, but who doesn’t have their dark days. He was a comedian, oh my gosh could he make me laugh so hard I would pee my pants. He could imitate actors on television and he loved the Muppets. That’s right!
He had the ability to make any stuffed animal come to life and each one had its own personality. The Roadrunner and Wylie Coyote was one of his favorite cartoons.  He also loved Foghorn Leghorn and could imitate he perfectly.  He was an artist, he could draw beautifully, which is another trait my children inherited. He loved cars and he had a motorcycle when I was a child. Later in is life he pursued that passion again. He like to go to the drag races and he took me along with him. Fun times!  He smoked a pipe when I was in my teens. He had beautiful hands. Dad had blue eyes that twinkled when he spoke and laughed. He liked music. He was a Christian.
When I was expecting my first child, my dad’s bother, my uncle Hoss, was in high school and he played football for Liberty Mounds in Mounds, Oklahoma. Hoss was a great football player, Liberty made it to the playoffs that year. I love high school football, dad did too. Dad wanted to see the games and so did I. So there were more than a few games that Dad and I went to and cheered the team on. I was due in December, the games were getting later into the season and one time he said I couldn’t go. It was only a 4 hour trip. What’s the big deal? He said he didn’t want to deliver his grandchild. Did I mention dad was a big chicken?
I got my way and we went anyway.
All of my life dad worked in some type of law enforcement. A sheriff’s deputy position brought us to Dallas when I was four. This was one year after Kennedy was shot, so no my dad wasn’t in Dallas when that occurred but he was privy to a lot of details throughout his time there. Later he trained to give polygraph tests and then went into fire training and security at the airport. Thankfully he was not working there went the plane crashed. By that time he was living in Oklahoma, married to my wonderful step mom and they were expecting my little sister. She came in January of ’86 and then the next spring they welcomed my little brother Brett. 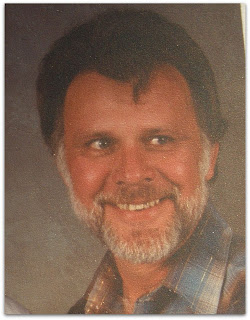 This post is not just a walk down memory lane for me, but more for my little brother and sister who never got the chance to remember the memories he made with them.  I remember the day he called to tell me Laci had been born.  She needed some time in neonatal and he was terrified.  He had already bonded with his little girl.  I also remember the day he called to tell me Brett had been born.  A boy and girl.  He was blessed.  At 1 and 2 years of age our dad was taken. And although I know he is walking with Jesus today, it doesn’t heal the hole in my heart completely. Not just for my loss, but for their greater loss. Through the memories of my Momma Pat and my dad’s brother, my uncle Hoss, our grandma and countless other friends and family, Laci and Brett learned about our Dad. They are the most amazing young adults and I can’t help but think that those precious short years he had with them, he inspired, taught and loved them enough that it imprinted on them. Momma Pat had her hands full, but God held her in his arms and by his grace they all flourished.
Our dad has four children, six grandchildren so far…Laci will marry in October and Brett is married to Treysa. I see many more grandchildren to come *wink* and nine great grandchildren and one due in December.
Happy Birthday Daddy!
the coyote finally catches the roadrunner!
Tweet