No Widgets found in the Sidebar Alt!

just a little housekeeping first… yesterday I spent a very frustrating 4 hours trying to figure out what went wrong with my feeds to my blog.  happy to have found the problem when I did, still frustrated that I had to completely delete my feedburner feed and start from scratch. blah, blah, blah…bottom line is this; if you had subscribed to my feeds (receiving blog updates via email) then at some point those updates where mis-routed and not getting to my readers.  all is fixed now but my subscribers are gone.  so if you were a subscriber you will need to subscribe again.

please and thank you!

It’s hot. Not just a little hot, it’s what I refer to has “nasty” hot. So hot that just stepping outside is like opening your oven door and the heat hits you in the face and melts the mascara on your eye lashes.
Texas summers are known for their hot days, but come on….this is the 31st day of 100+ temperatures. At this writing it is 105 and my pool temperature is reading 93 degrees. It probably feels like bath water. It’s so hot that I set my thermostat to 80 and it still feels like heaven in my house. My poor AC just goes non stop. My poor pocket book just keeps getting lighter 🙂
Oh well…when life gives you extreme heat, read a book. That’s my version of the “when life gives you lemons” quote.
Just curl up under a ceiling fan and read, that’s what I do.

Last night I finished “The Help” by Kathryn Stockett.  I’ve never read anything from her before, in fact I don’t even know if she’s written anything before. But she done good with this one.  Sorry about the grammar but I’m still stuck in 1962 in Jackson, Mississippi.

Does that happen to you?  You get so wrapped up in the book that you begin to talk like the characters? 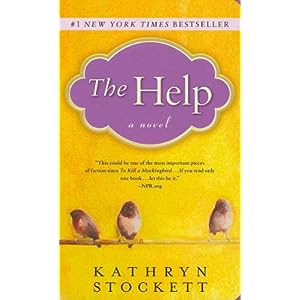 I’ll admit to you right now that I am not good at book reviews.

I really don’t know how to convey my summery of a book through writing.  Well I could probably muddle through but it wouldn’t be eloquent.  But I can express my opinion about the book and I will.

I was drawn to the book by it’s cover. Shallow I admit, but it’s true.

Then I saw the review from NPR on the front of the cover, they compared it to my fave; “To Kill a Mockingbird” by Harper Lee, I was one step closer to buying it.

That was a really smart marketing move on someone’s part.  It worked on me and I’m sure that I’m not the only one who picked it up and studied it in the bookstore after seeing that review.  Well everyone knows that once you get someone to hold your product in their hand, your just that much closer to a sale.  Cha-ching!!!   That worked on me too.

As I mentioned earlier, this story takes place in Jackson, Mississippi in 1962 and what happens in between the front and back covers of this book will leave a lasting impression on you.  These are some things that I found interesting, being that I was born in 1959, by the time 1962 rolled around, I was only three years old.  Therefore I was not aware of certain newsworthy topics from those times, such as smoking was not considered to be bad for you until the surgeon general’s report announced it to the public in 1964.  Before that I guess know one thought much about it, therefore there was a prevalence of smoking referenced in this book.  The things I did know about were Rosa Parks, Edgar Mevers and Martin Luther King.   But being a very young child at the time, I didn’t remember these people, I’ve only read about them and learned about them in school.  So when the author references certain products or less notable events, it seemed odd to me that things these actually had a date in history.

Being set in Mississippi in 1962 along with the title, I guess you can surmise that the story would be about racial tension.  You would be correct, however what I found extremely worthy of my time, was the way the author brought these characters to life through her words.  Ms. Stockett didn’t mince words, there were parts of the book where I cringed and wept.  But there were also parts that made me giggle.  There are a few characters that I fell head over heels in love with and that is the part that makes finishing the book so hard.  You kinda grow close to these people in the story, you cheer for them and you grieve with them.

Now the movie is out.

I’m debating on whether I will see it or not.

Here’s my opinion; if you haven’t read this book, you should.  It’s a great book.  I would not recommend seeing the movie before the book as I’ve never seen a movie that has surpassed the book.

Another reason I didn’t want to see the movie first, is because I like to form my on thoughts about how these characters looked by the way the writer describes them, not by the actors who have played them in the movie.

I wonder…years from now, will this book be among the literary giants?

Will Kathryn Stockett’s name be as notable as Harper Lee?

Did you know that; To Kill a Mockingbird was Harper Lee’s only published book and it won the Pulitzer Prize in 1960. Amazing isn’t it?  I for one hope that Ms. Stockett writes another novel.  She writes very well.  I was riveted from page one…are you curious yet?

The Amazing Gardening Trick I Learned From The Birds