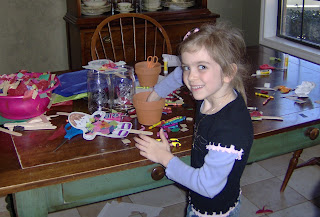 Today was craft day with my babies and although we were missing Will terribly, we managed to have a terrific time. Of course there was the usual mess we always seem to make after craft time….today we made Joseph’s Coat of Many Colors with little bits of colored tissue paper. Our Joseph puppet looked very stellar in his fine coat. Doesn’t she strike a pretty pose?

Haven opted out of the craft today and made most of the opportunity by playing with Thomas and his train buddies without interruption. He was so quiet…had to check on him a couple of times to make sure he was still in the room.

He really was happier than he looks…..I think he was in thinking mode. I wonder about what? 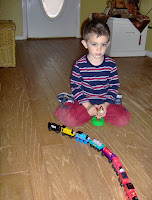 Park was in high gear today and ready to do anything….after he colored Joseph’s face to match his coat he moved on to more creative means of entertainment…. 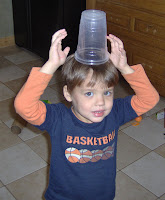 What a ham! Reminds me of another little guy that I am very fond of…..hmmm!

We ate some lunch at such time that I over heard Haley say that Grandma makes the best grilled cheese sandwiches in the world…..and later recanted her statement as she said that her mommy makes the best! Little stinker…

Then it was onto more scientific matters….time to experiment with potatoes. I must be missing my elementary school days…this experiment was always my favorite…..placing potatoes in water and waiting for roots to grow and then the vine begins to grow on top. I explained to the little ones that they would be able to pick their potato and name it after we made it comfortable in it’s new home…..a very large mason jar! Thanks Mom for all those homemade pickles, we have found a way to recycle the jars….

Potato project No.1 After explaining to them that the toothpicks didn’t hurt the spuds as we pushed them into the sides, we positioned each spud lovingly into the jar and filled with water. I then told them what they could expect to see in a few weeks. That we had to be patient and once the roots begin to grow and leaves appear, we will add food coloring to the water to see if it will change the color of the leaves. They will remain in Grandma’s windowsill and I will photograph any changes. When they return in a couple of weeks, we might have something to talk about.
Next came the naming of these pampered potatoes…see photos for proof! 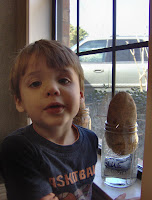 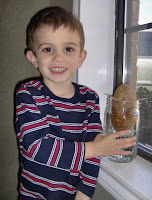 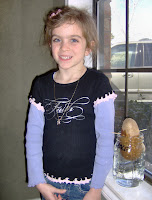 Then it was outside for some sunshine, basketball and truck driving!